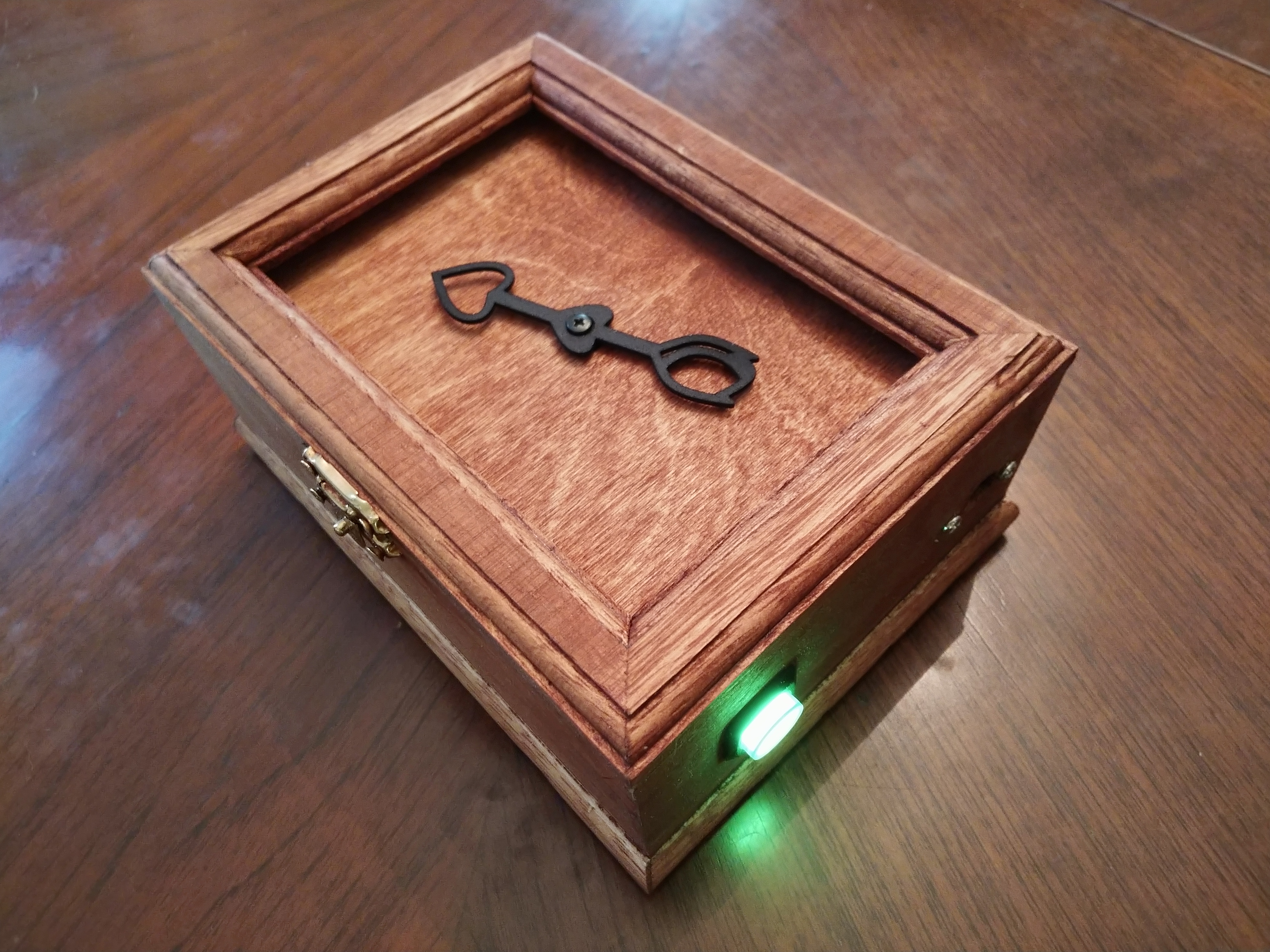 I found the personal compass project at Instructables.com quite interesting. Basically, a personal compass works like a regular compass, but instead of pointing to magnetic north, it points to a particular location of personal interest. Maybe it is pointing to the place where you were married, perhaps where your childhood home is.

All this compass magic is done using an Arduino with a compass (magnetometer) sensor, GPS module and a servo motor to point the way. However, there were a couple of things I didn’t like about the original project:

The extra gears complicated the build and it still had to “rewind” itself when it reached its 360 degree limit, so I decided to use a continuous servo with feedback. This allowed for full 360 degree rotation and beyond of the compass needle. The feedback wire is used to determine where the pointer is located so it can be positioned at the correct angle. The one drawback for the continuous rotation servo with feedback is that there are not that many available, and the only one I found required 5V to run, even with no load on the servo. So, I added a 3V to 5V booster module to get the servo to work with the 3V battery power.

To solve the hard coded position issue, I decided to go with an ESP32 based Feather processor from Adafruit, the HUZZAH 32. This processor includes WiFi and Bluetooth features. I didn’t really need the processor to connect to a WiFi network or Bluetooth, but its web server feature provided a way to save configuration settings like the location’s coordinates from a cell phone quite easily. While I was at it, I wanted to add a smart button feature.

My code for the improved personal compass and supporting applications can be found on GitHub.

The ESP32, along with it’s ESP8266 sibling, has a deep sleep mode that can be used to programmatically power up and down the compass. This method does not fully power down the unit like a true power switch, but it shuts down most of the processor and the power drain is very low. So instead of incorporating an on/off switch I used a momentary switch for the project. This allows for greater flexibility and allows the switch to work in different ways depending on when and how long the button is pressed. I came up with these uses for the switch:

We can also power down the unit automatically after a set period of time to conserve the battery.

The LED was programmed to blink while acquiring the GPS location, switching to steady on when the GPS location was found. It also blinks to indicate you have arrived at your destination (when you are within a specified zone radius of the destination), and when it is powering down.

The Improved Personal Compass was built using the HUZZAH32 Feather (ESP32) and included the Feather Wing Tripler to incorporate 4 boards from the Adafruit Feather system.  This made the project modular and easy to test items individually.

You will find the code on Github at https://github.com/ZContent/Personal_Compass

The following pins on the HUZZAH32 were used for this project:

The Adafruit Feather system provided a modular way to build the project. I used a Adafruit Feather Wing Tripler to connect 4 board together. So, you are asking how did I connect 4 board with 3 connections? Well, I stacked two of them together, with the Ultimate GPS FeatherWing stacked on top of the HUZZAH32. Two FeatherWing proto boards were used to house the other electronics. One FeatherWing proto board contained the LSM303 magnetometer with leads for the smart switch and the LED. The other proto board contained the PowerBoost board and leads for the servo and the feedback wire. All modules assembled in box. The compass pointer was designed in Fusion 360 and printed at Shapeways. You can enter the personal compass settings from a smart phone, no hard coded location required.

With all this greatness in using the ESP32, it is not without its hiccups. Adafruit recommends this chip for experience developers only. The processor is new and may not be supported with some libraries. I found this true in a couple of instances. For example, I found a bug in the I2C support in the ESP32 libraries. Fortunately, there was a patch available but it had not made its way yet into the official release.  Also, the standard Arduino servo library does not support the ESP32 (at least not yet). The good news is that someone has written an ESP32 specific servo library that matches the API calls of the Arduino servo library (see https://github.com/jkb-git/ESP32Servo ).

Use of a continuous rotation servo with feedback was a must for this project in order to allow full rotation of the compass pointer without a complicated gear setup. Unfortunately, there are very few motors on the market that provide both continuous rotation and feedback. Adafruit sells the Parallax Feedback 360° High Speed Servo. This servo was a bit overkill for my needs but I could not find any other smaller motors. It also required 5 volts, so an Adafruit Powerboost module was added to convert the 3V battery supply to 5V that the servo could use.

Interestingly, the magnetometer provided some of the most difficult challenges of the project. First, it was noticed the compass needle moved if the device was tilted slightly up or down or rolled clockwise or counterclockwise. Research was done to find an algorithm that would take tilt and roll into consideration when calculating the magnetic north direction. The algorithm uses acceleration data in addition to the magnetometer data to calculate the adjusted magnetic setting. Fortunately, the LSM303 chip used to retrieve the magnetometer data also has an accelerometer where this data can be retrieved. I still found some compass variations with tilt and roll with the new algorithm but it was less than the original algorithm.

The other issue with the magnetometer was magnetic interference from the servo motor. There are several magnets in the servo used to rotate the motor shaft and determining the position of the shaft using a Hall effect sensor. These magnets affected the sensor’s reading of magnetic north, which I could see changing as the compass needle rotated. I added  copper tape and a sheet metal wall between the sensor and the servo to help minimize the interference but a better idea would be to use a bigger enclosure where the servo and magnetometer are further away.

These ideas are not in the code but could be added for an improved “Improved Personal Compass”. With additional code, the device could handle multiple locations to avoid having to re-enter GPS coordinates for a shortlist of locations.  A long press of the button could act as a switch between locations. One could also add configuration settings to use the device as a compass to magnetic or true north instead of a GPS location.